As we all navigate the ever-changing circumstances related to COVID-19, our tagline, “life happens to good people,” has never felt more appropriate.

In accordance with current provinical regulations, our office will be closed until further notice. However, our family law and employment law experts remain available to serve you by email. We will continue to accept new clients virtually. To connect with one of our lawyers, please email us at law@mrkfirm.com.

With Premier Ford beginning to restart the economy and allow specified businesses to reopen I was delighted to see that my dog would likely get a haircut before I do. I need a haircut badly. I currently look more like a roadie for an 80s glam rock band than a lawyer.

During the mandated COVID shutdown I have been working from home, which also means my standard workplace attire of a suit and tie has been replaced with either jogging pants or a plaid onesie.
I live in a rural community just outside of Waterloo Region and a plaid onesie is perfectly acceptable, if not encouraged, attire. Wearing plaid, I would say, is an essential part of my heritage. 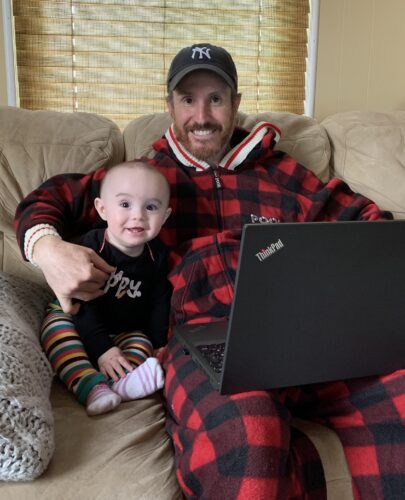 What is Acceptable Workplace Attire, Legally?

Now I ask myself what is acceptable workplace attire when I go back to work in the office? If I’m not allowed to wear my plaid onesie at work am I being discriminated against on the basis of my rural heritage?

Prior to the COVID-19 pandemic, the Human Rights Tribunal of Ontario (“HRTO”) dealt with a similar question in Macdonnell v. Waterloo (Regional Municipality) 2019 HRTO 1586. The Applicant in that matter was a local Bus Operator who wore a kilt to work on a casual Friday. When he showed up to work wearing his kilt he was sent home with pay to change his outfit before beginning his shift. Wearing the kilt was a violation of a prior notice issued by the employer, which outlined that kilts were not appropriate to wear on casual Fridays. Macdonnell wore the kilt in protest on that casual Friday being fully aware of the employer’s position and policy.

The Case of the Kilt

Macdonnell was Scottish and he thereafter filed an application at the HRTO alleging he was discriminated against on the basis of his Ancestry. At the hearing, Macdonnell pointed out, among other things, that he “ate haggis,” “listened to Scottish music,” and was married wearing a kilt, to illustrate that wearing a kilt was an important part of his Scottish ancestry.

The HRTO ultimately dismissed the Application as having no reasonable prospect of success, as Macdonnell failed to produce the necessary evidence to establish a case of discrimination or harassment.

This case is a clear demonstration that the HRTO will not deal with general allegations of unfairness.
Further, an Applicant has the onus of establishing a link between differential adverse treatment and a protected ground under the Code as not all personal characteristics are protected under the Code. These are two very important points to consider before filing an HRTO complaint.

We use cookies to ensure that we give you the best experience on our website. By continuing to use the site, you consent to the use of cookies.
To learn more please review our Privacy Policy.Ok